Tibetan spiritual leader the Dalai Lama has received his first dose of the coronavirus vaccine while urging others eligible to "take this injection".

"This is very very helpful, very good," he said as he was given the Oxford-AstraZeneca jab at a facility in the Indian city of Dharamsala on Saturday.

The Dalai Lama had enrolled himself to be vaccinated, officials said.

India launched its vaccination drive on 16 January, but it was limited to healthcare workers and frontline staff.

Since 1 March, however, the scheme has been extended to people aged over 60 and those between the ages of 45 and 59 with underlying illnesses.

Receiving his first shot in the northern state of Himachal Pradesh on Saturday, the Dalai Lama said people needed to be vaccinated to "prevent some serious problems".

"We arranged the session in the morning, considering the security concern," he added.

Speaking to the BBC last year, the Dalai Lama said the pandemic had promoted a "sense of concern, a more compassionate feeling".

The Indian government aims to cover 300 million "priority people" with its vaccination drive by the end of July.

The country's drugs regulator has given the green light to two vaccines - one developed by AstraZeneca with Oxford University (Covishield) and one by Indian firm Bharat Biotech (Covaxin).

Indian Prime Minister Narendra Modi, 70, was among the first to get his vaccine shot.

Since the pandemic began, India has confirmed more than 11 million cases and over 157,000 deaths.

Much of India has reported a sharp fall in cases recently - with daily infections for the county falling to less than 20,000 from a peak of over 90,000 in September.

But a handful of states have recently reported a sharp increase in the number of cases. 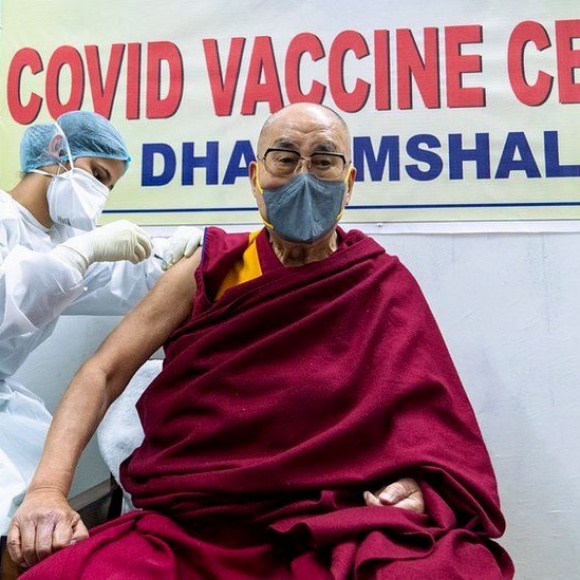